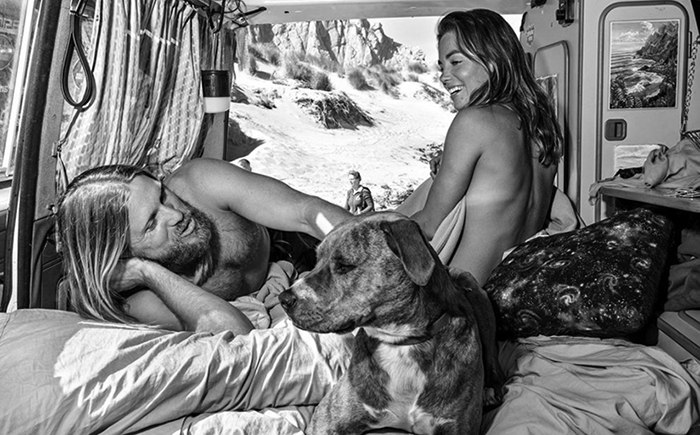 Despite the bad rap often laid upon the van life, such as Matt Foley’s lament of having to live “in a van down by the river,” or Jerry rejecting Kramer’s offer of a trade of celebrity memorabilia for Jerry’s “big, juicy van,” some have embraced the bohemian van life and turned it into a social media movement.

The New Yorker recently profiled a couple’s success living the van life. Bolstered by the compliment(?) that they’d “be great in a van,” Corey Smith left his glamorous life as a kayak store manager and his gal pal, Emily King left her career at Sotheby’s for new lives in a $3500 1987, cream-colored Volkswagen Vanagon Camper, with their dog, Penny.

The couple has been able to transform their work-a-day lives (at least Emily did) to the devil-may-care van life by building a hefty social media following, mainly through Instagram, and selling sponsorships and advertising various wares as they travel. As an aside, you might notice, from the photo above, that Smith appears to be punching above his weight class, but good for him! He quickly realized that pics of Emily in a bikini (or less) are the most popular (DUH!).

So, if the van life is your dream. It can be done. Quit that full-time gig. Buy that van. Have a bikini-clad lass along for the journey, and get Instagrammin’!

Sounds pretty good to me, despite what Matt Foley says.